The US envoy to the UN, Nikki Haley, is dancing to Israel’s tune as she calls for a Western coalition against Iran while posing in front of a missile’s wreckage, former CIA officer Ray McGovern told RT, saying the spectacle was aimed at distracting attention from Yemen.

“I think that Netanyahu is calling the shots. Look, Jerusalem has just been recognized as the capital of Israel, Nikki Haley is getting on this bandwagon. She sees this as being very propitious for her, politically,” McGovern said.

Describing Haley as “frightfully ambitious,” McGovern argued that if US Secretary of State Rex Tillerson had given her some guidance on the issue, he has not been very effective, as the US ambassador to UN seems to be “following the kind of talking points that are originating not only in Washington, or in New York, but in Tel Aviv.”

The supposed proof provided by Haley of Iran’s alleged violation of the UN resolutions pales when compared to the scope of violations committed by US-backed Saudi Arabia, Iran’s archrival, McGovern said.

“It’s giving hypocrisy a bad name, when you look at the situation in Yemen, where the US supported Saudi attacks that indiscriminately killed so many civilians as opposed to this one rocket that was sent by the Houthis into Saudi Arabia to land whatever it might,” McGovern said.

“This is the time to beat the drums against Iran and the best thing they could find are some missile parts,” McGovern said, adding that while the missile might indeed have originated in Iran, it was used by Haley “to deflect a conversation from the fact that a million people in Yemen now have cholera, 70 percent of the Yemenis now depend on outside food to survive.”

The rocket might have been supplied to the Houthis “years ago,” he said, and the fact that it landed near a Riyadh airport on November 4, was a mere “piece of luck” for the rebels.

By focusing on Iran, Washington is trying to heal the wounds from its defeat in Syria, where it was effectively excluded from the settlement process, led by Russia, Iran and Turkey.

“Nikki Haley and Washington seems to be in an unreal world, largely because they have just lost big time. Syria – they lost. They lost to the Russians and the Syrians, and the Iranians, and Hezbollah. Now, what's the proper reaction to that – the proper reaction would be too come back and reassess where we are,” McGovern suggested, but instead what he calls an “unholy alliance” of the US, Saudi Arabia and Israel “are out to put all kinds of pressure to Iran.” 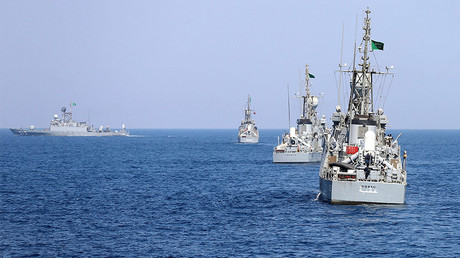 While Haley said that the segments of a rocket she presented at a press conference on Thursday was an “undeniable” evidence of Iran’s funneling weapons to Houthi rebels in violation of the UN-imposed embargo, the UN itself so far has been unable to confirm the link between Iran and the missiles.

The UN experts who traveled to Saudi Arabia to examine the wreckage of two rockets fired on July 22 and November 4 found that they had “common origin” as they were both “consistent” with the diameter of Scud missiles, a variation of which is Qiam-1, made and designed in Iran, UN General Secretary Antonio Guterres said in a confidential report to UN Security Council last week, seen by AFP and Reuters. Three components of the November 4 missile “bore the castings of a logo similar to that of the Shahid Bagheri Industrial Group,” he said. He then warned against jumping to conclusions, noting that the UN experts are still “carefully reviewing” the evidence.

Another confidential report presented to the UNSC by a group of independent experts monitoring the situation in Yemen last month argued that while remains of four missiles that landed into Saudi Arabia appeared to have been made in Iran, it “as yet has no evidence of the broker or supplier.”

Meanwhile, Iran itself dismissed allegations against it as “baseless and unfounded.”

The post ‘Netanyahu is calling shots as US beats drums of war vs Iran' – CIA veteran appeared first on News Wire Now.

Boris Johnson is now all but guaranteeing a no-deal Brexit