By Jennifer Smith and Louise Boyle For Dailymail.com

A teenage Dutch model who was found dead at a Malaysian apartment complex last week after an apparent fall from a balcony had been partying with a pair of wealthy American swingers before she died, it has been claimed.

Ivana's grandfather, friends and Dutch media have named the couple as US citizen Alexander Amado Johnson, 45, and his Indonesian wife Luna.

Johnson, who has ties to Georgia, is the founder of Everus World, a cryptocurrency company based in Kuala Lumpur. Friends of Ivana's say she modeled with Luna, who is believed to be around 30, and that this is how they met.

Before returning to their apartment at 5am on December 6, Ivana's friends said the trio had been out drinking in Bangsar, a city 20 miles away from their apartment.

The two women were pictured together in a selfie Ivana sent to her boyfriend Lukas Kramer two-and-a-half hours before police say she died.

When questioned after the teenager's body was found, they reportedly told police they did not know what happened to her.

Ivana's friends and family in Kuala Lumpur say they were both taken into custody on drugs charges but they have not been charged over the teenager's death.

When he viewed her body on the morgue, the 18-year-old's father said she had 'cruises' on her neck which looked like finger marks. He fears foul play and does not believe that Ivana fell or committed suicide.

'I saw bruises on her neck, like fingerprints — as if someone had grabbed her there,' her father Marcel Smit told Dutch newspaper Algemeen Dagblad.

The US Embassy in Kuala Lumpur told DailyMail.com it was aware of the situation but was prohibited from confirming Johnson's arrest by privacy laws. 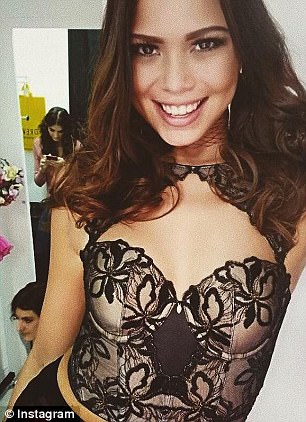 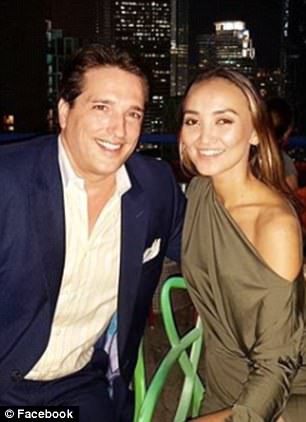 Ivana Smit, 18, (left in a fashion show days before her death) died last Thursday after plummeting from the balcony of Alexander Amado Johnson and Luna Johnson's 20th floor apartment in Kuala Lumpur 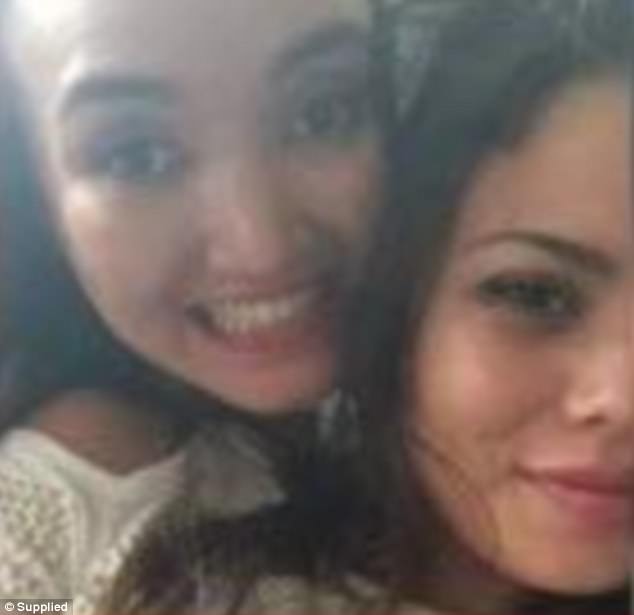 In this selfie which Ivana sent to her boyfriend at 7.25am, two hours before police say she died, Ivana (right) is seen with mother-of-one Luna (left) who friends say sometimes modeled with the teen

'We are aware of media reports of the detention of a U.S. citizen in Malaysia.

'The Department of State takes its obligation to assist U.S. citizens abroad seriously. Due to privacy considerations, we have no further comment,' an embassy spokesman said.

Ivana arrived back at the building with the couple at 5am after a night of partying in Bangsar.

At 7.25am, she text her boyfriend with the selfie. Police say she fell at around 10am.

Her body was not discovered until 3pm, six hours later.

An autopsy revealed she had traces of ecstasy and alcohol in her system at the time.

When questioned, the couple told the police that neither one of them knew what had happened.

Mr. Johnson said he was asleep between 10am and 3pm and his wife reportedly claimed to have been taking their four-year-old daughter to school in the morning.

Neighbors have since claimed that they heard shouting coming from the apartment.

Ivana's father insists there is foul play and questioned how, when his daughter's clothes and bag were still inside but she wasn't, they did not know what had happened. 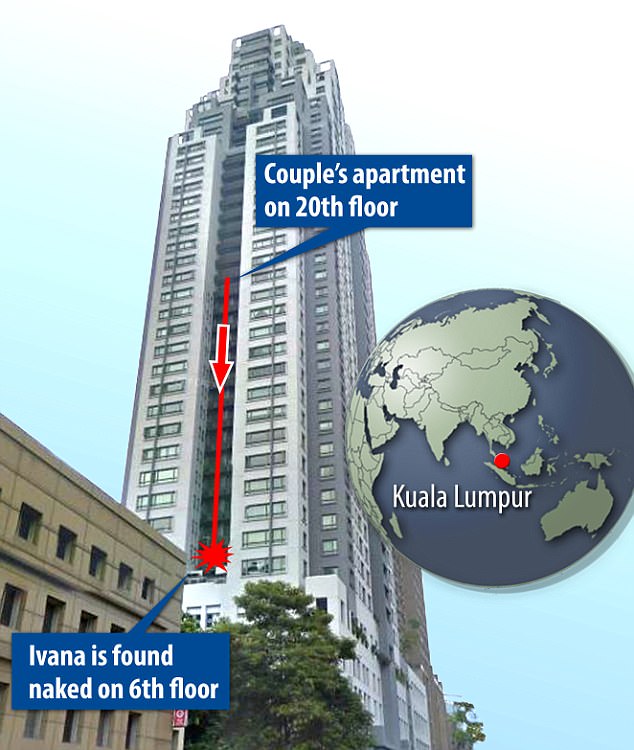 Ivana's naked body was found on the sixth floor balcony of this Kuala Lumpur apartment building. It is a wide terrace. Police say she fell from the balcony of a 20th floor apartment above at around 10am on Thursday December 7 but she was not found until 3pm that day 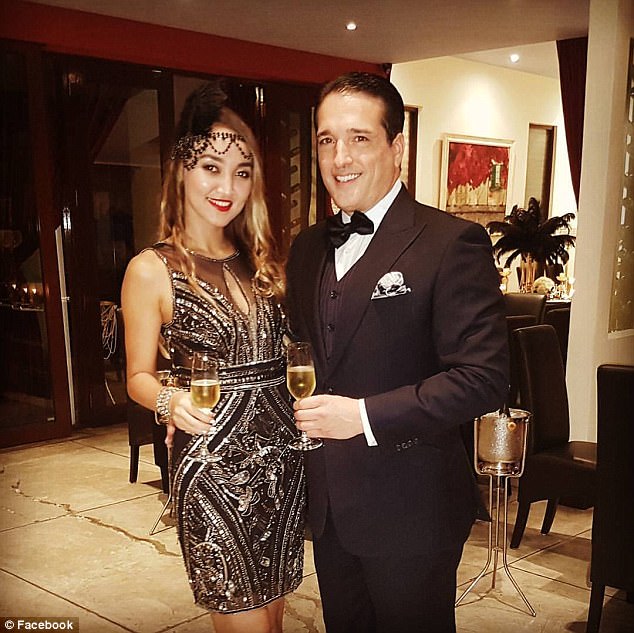 Johnson, 45, is a US citizen and was described by Ivana's friends and family as a millionaire cryptocurrency trader 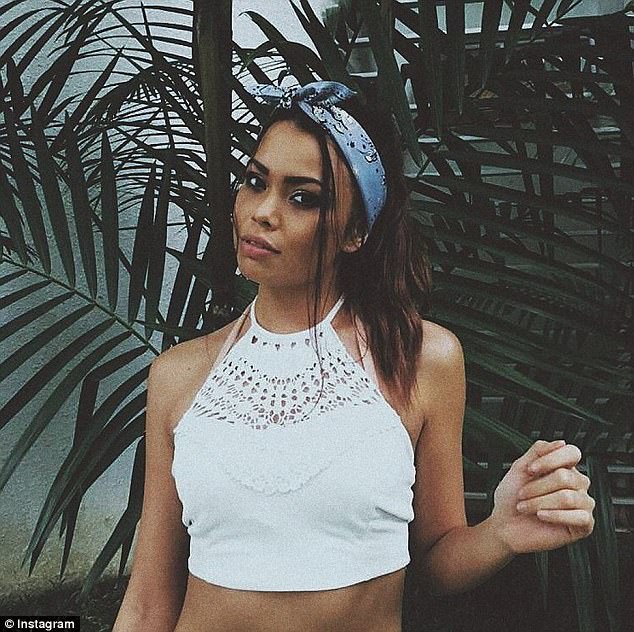 Ivana had alcohol and ecstasy in her system when she died. She was naked when she was found and her clothes and bag were still in the couple's apartment but her underwear and shoes have not been found

Police have still not found Ivana's shoes or her underwear.

Her family suspect foul play and say the full story has not yet been unravelled.

'Only when you bend over, do you fall off. She did not fall and did not jump either,' her father said.

Police have said there were 'no criminal elements' to the model's death.

Ivana's devastated father along with his wife and son have now arrived in the country and contacted Interpol to demand a full probe into the incident.

Ivana's grandfather Hendrik Smit, who has lived in Penang, Malaysia, for over two decades and raised Ivana as a child there, said today: 'We cannot believe she fell from level 20 and the body was found at level 6.

'She was found there naked. Where are her shoes and underwear? We believe there is a criminal element in Ivana's death.' 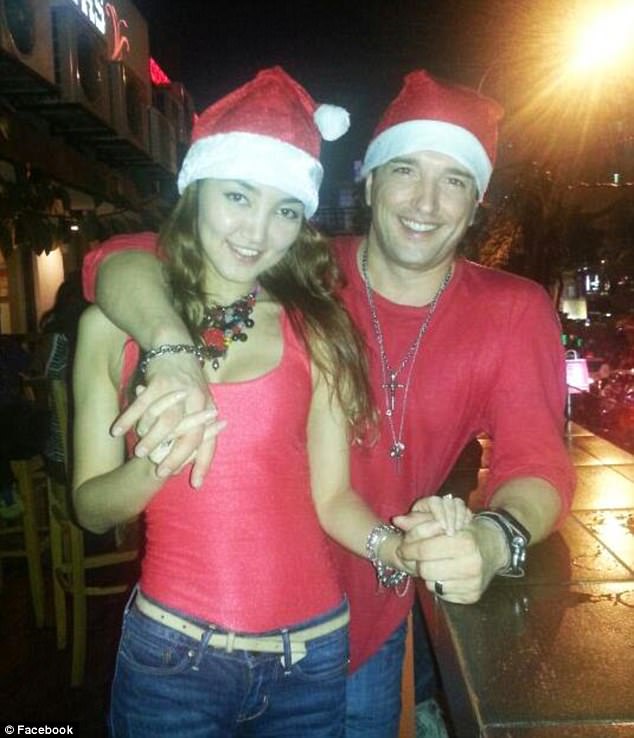 Ivana's friends say she had modeled with Luna in the past and that the trio had been out drinking in Bangsar, a city nearby, before she died 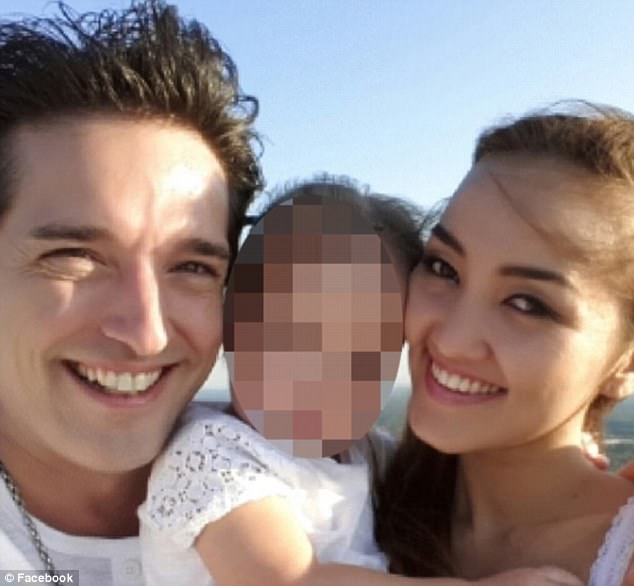 Luna told police she took the couple's young daughter to school on Thursday morning at around the time of Ivana's death. Her husband is said to have told investigators he was sleeping 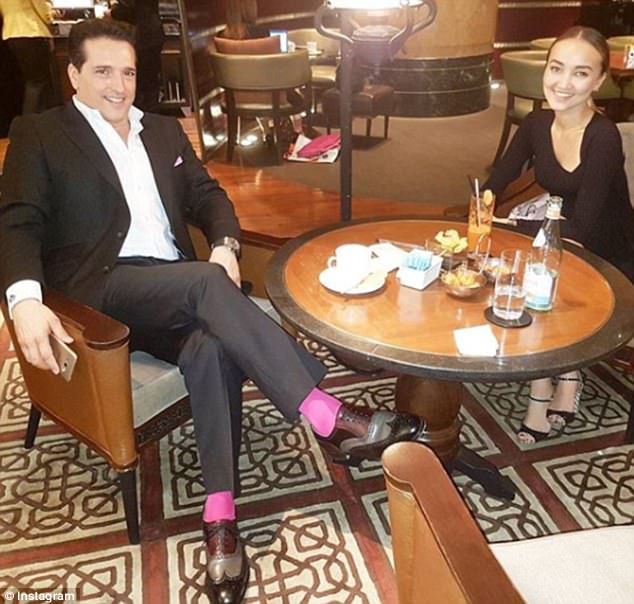 Johnson, who previously worked in Georgia and Florida, is believed to have lived in Kuala Lumpur since around 2011. His wife is Indonesian

He told DailyMail.com on Wednesday that the Johnsons remained in custody on drug charges. He does not know why his granddaughter was at the apartment.

Her family also say it was not likely that she was drowsy because of the ecstasy found in her system.

'Those are not drugs that you're going to sleep on,' her uncle Fred Agenjo said.

'There are so many questions. Her clothes have been found, but her shoes and underwear are not.

Ivana had first moved to Malaysia 13 years ago and lived with her grandfather Fredrik. 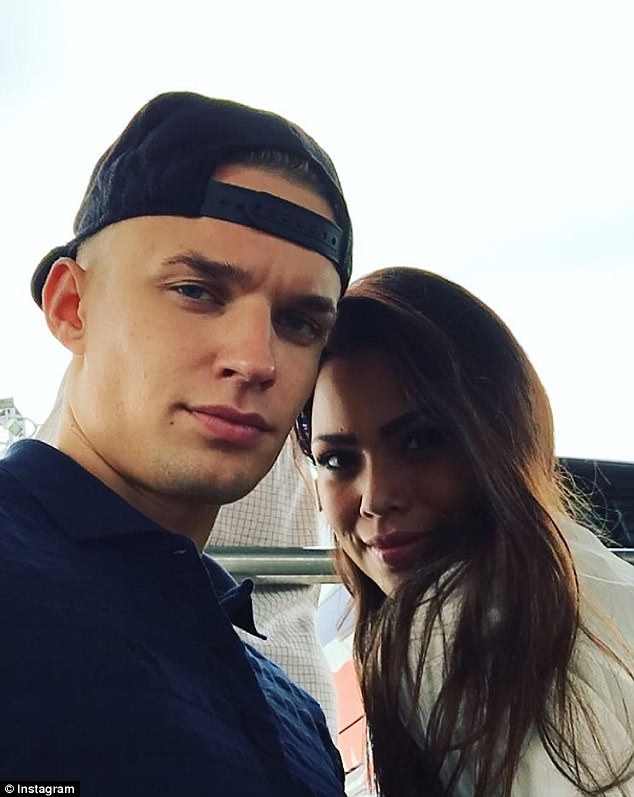 Ivana is pictured with her boyfriend, German national Lukas Kramer 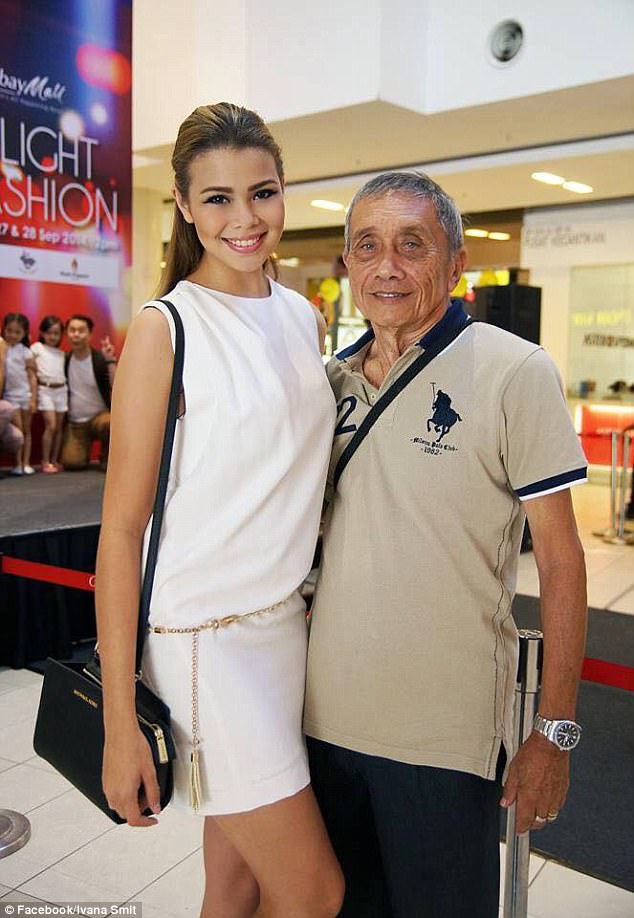 Ivana's grandfather Hendrick Smit believes there is a criminal element to her death. Her family insist she did not fall and did not jump from the balcony 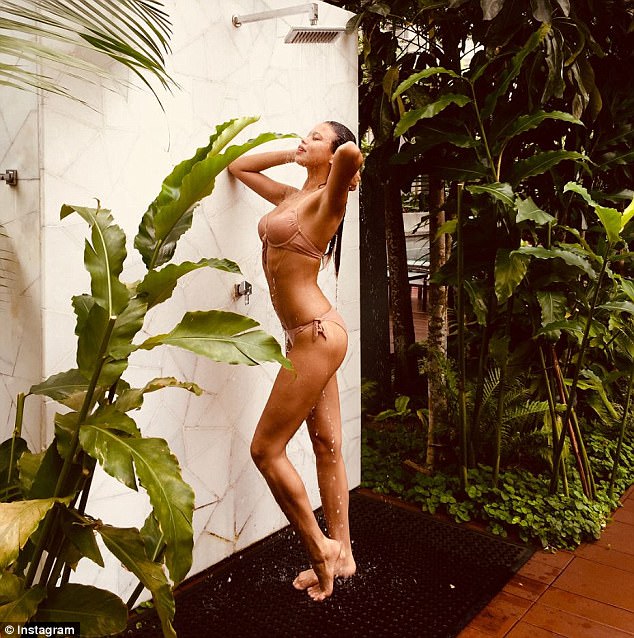 She was the second runner-up in Malaysia Supermodel Search 2014 and a leading model in the country. 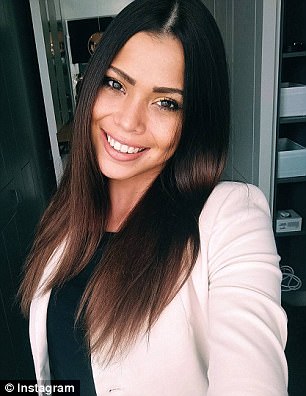 He said: 'Our investigations so far and the post-mortem report show no elements of foul play.'

Nathalie Woodworth, one of her best friends who went with the family to view her body, said they want more information from police.

'We all just want an explanation to how she fell down.

'Not just saying "she fell" and no explanation or proof.

'Even if she did fall we all will live with it, but we just need proof,' she told DailyMail.com.

Neither Mr. Johnson nor his wife responded to DailyMail.com.

In a statement, a spokesman for Everus said: 'Everus is aware of the ongoing investigations by the Malaysian authorities with regards to one of our employees.

'The company will continue to monitor this matter carefully. Until the relevant authorities release official statements, we are unable to comment further.'

Summer scorcher with a heatwave predicted this weekend