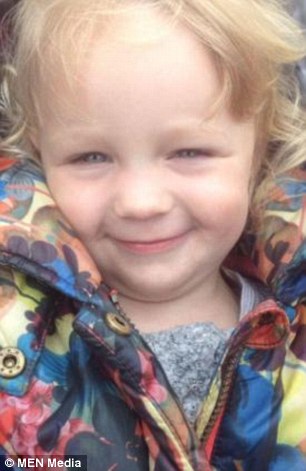 The fourth child trapped in the arson attack that claimed the lives of three children has also died today after her life support machine was switched off.

Lia Pearson was rescued by fire crews from the burning terraced house in Walkden at 5am on Monday morning.

But after 48 hours in intensive care the little girl has passed away, her grandmother has revealed.

Sandra Lever posted on Facebook on Wednesday afternoon: 'Just letting everyone know they just turned life machine off on Lia she has passed away peacefully my beautiful granddaughter go find your brother 2 sisters love you all so much.'

It is now likely they will face a fourth murder charge after the three-year-old's death. They are also accused of attempted murder as well as arson with intent to endanger life. 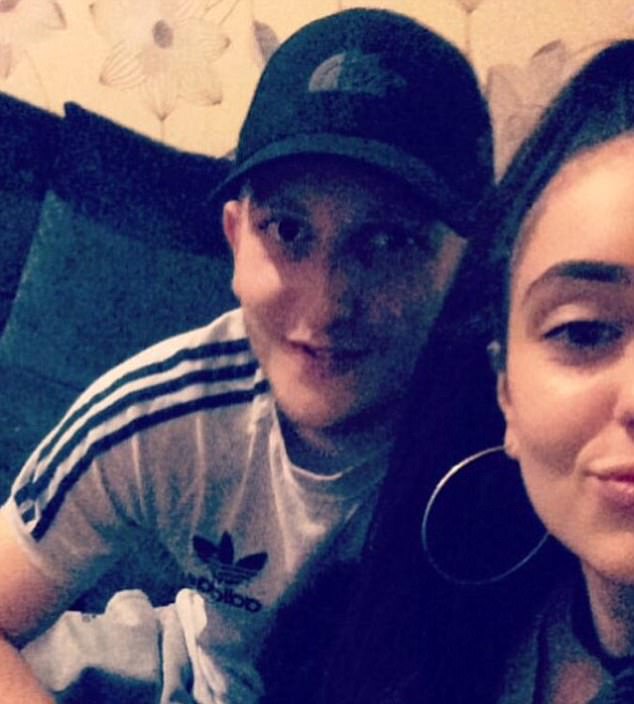 Zac Bolland, 23, and Courtney Brierley, 20, (pictured together) have been charged with the arson attack that killed three children and almost killed four more 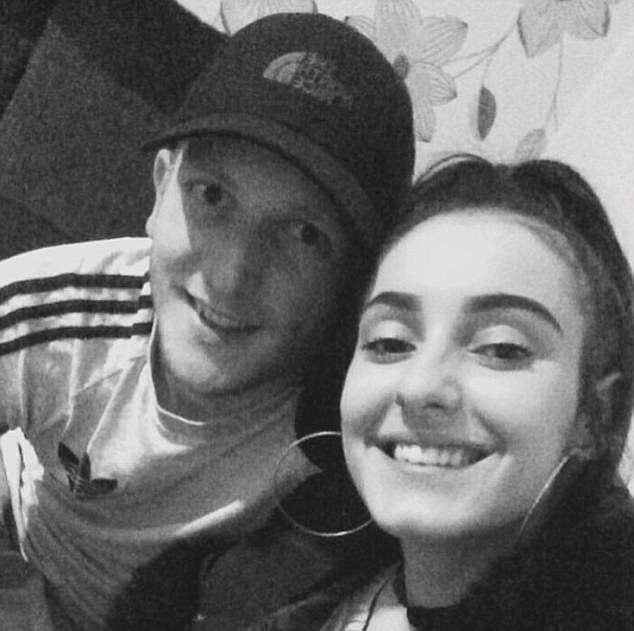 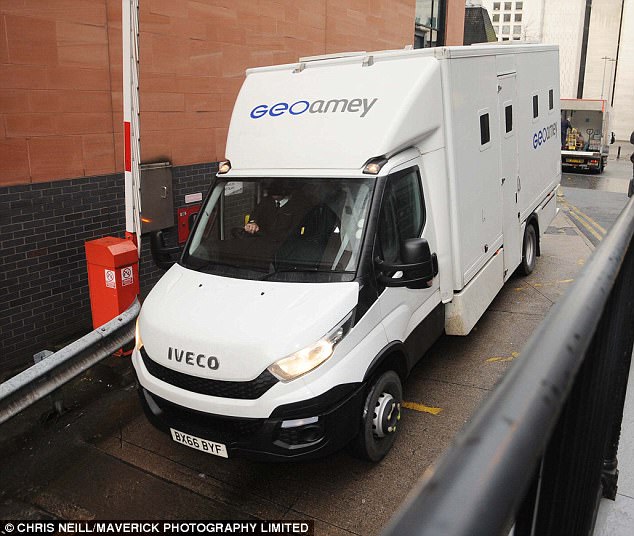 A prison van believed to be carrying murder suspects Zac Bolland, 23, and Courtney Brierley, 20, arrives at Manchester and Salford Magistrates' Court this morning 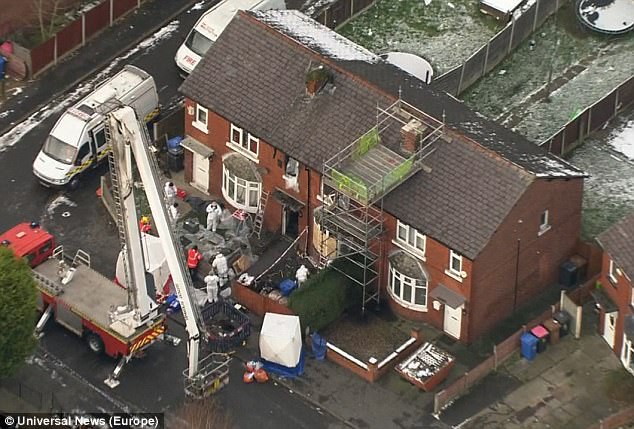 Three children died in the devastating house fire in Jackson Street, Walkden and another three-year-old is fighting for her life 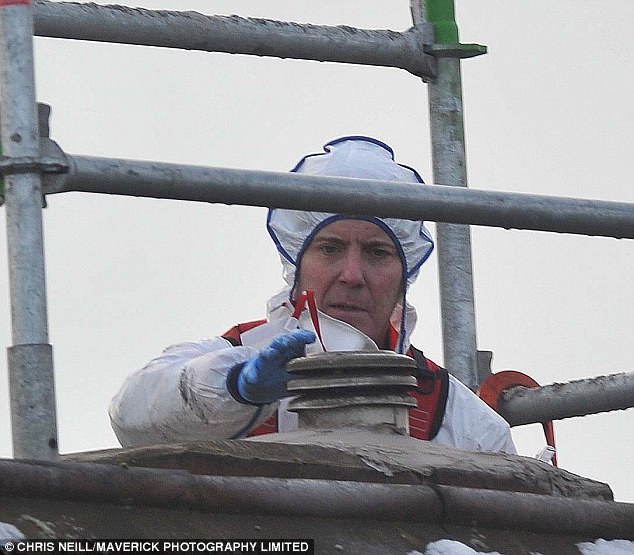 The couple only spoke to confirm their names and ages before being remanded in custody until tomorrow when they will appear together in the dock at Manchester Crown Court.

Three petrol bombs are believed to have been thrown into the house – including one down the chimney – killing Michelle Pearson's daughter Demi, 14, son Brandon, eight, and daughter Lacie, seven, as they slept in Walkden, Greater Manchester at 5am on Monday.

Their mother, 35, is heavily sedated in hospital and unaware of the tragedy while a three-year-old child remains in a critical condition today.

Bolland was arrested in the street after police dragged him from his car with Brierley on Monday night as a crowd screamed abuse.

As Courtney and Zac stood together in grey jumpers and tracksuit bottoms, they stared intently at district judge Khalid Qureshi as he read out the charges against them.

Courtney wore her black hair loose and no make up. She had a look of distress on her face as she was quickly led out in handcuffs by a guard.

Zac held a blank expression as he heard the charges and failed to glance at his girlfriend throughout the two minute hearing.

No family are believed to have been present in court, of either the accused or their victims.

No details of the case were presented in court as District Judge Khalid Quereshi said the matter was too serious to be dealt with in his jurisdiction and will be heard again on Thursday at Manchester Crown Court.

Neighbours of Zac Bolland claimed today the house he shares with his mother had its windows smashed around two weeks ago.

Police cordoned off his house yesterday and removed evidence including empty bottles and a length of pipe.

A woman round the corner from the Pearson's home said: 'I was physically sick when I heard those kids had died. I hope whoever's done this rots in hell'.

Describing Zac Bolland's arrest at around 7pm last night Kyle Skelhorn, 31, said: 'My girlfriend was coming home from work last night at about 6pm and she was adamant she'd seem him driving down the road.

'She said: 'I'm sure he's just driven past in a car'. We saw him being pulled from the car by police and being patted down. He flipped his hood up over his head when he saw I was videoing him. The police led him away to a van.

'We've had dealings with Zac Bolland in the past – he's not a pleasant person'.

Lauren Murray, who captured the moment in Grosvenor Road at around 6pm, said: 'I was walking down the street to go home and saw the police driving down really slow and then they pulled up outside my house.

'The next thing, I saw Zak in a silver car so I got my phone out and started filming. Courtney was sat in the back of the car surrounded by police while he was led away, her face was just white.' 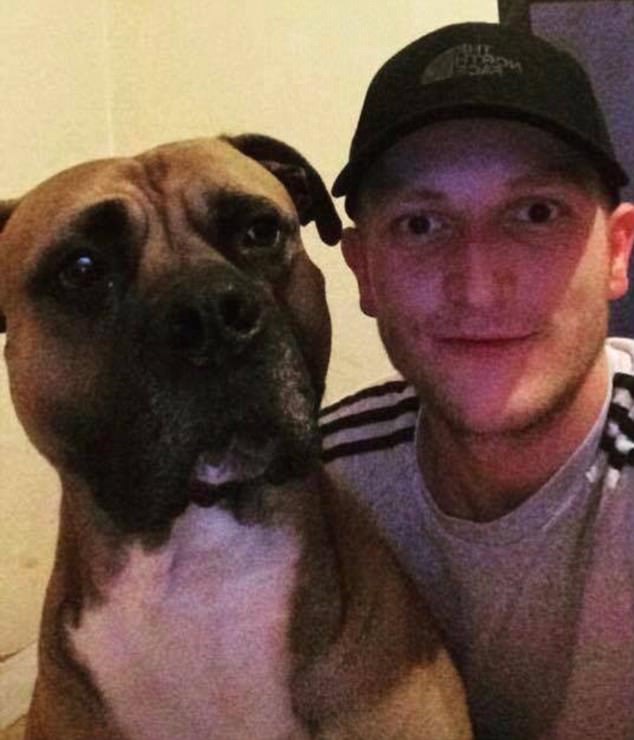 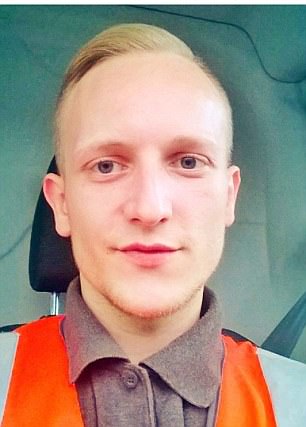 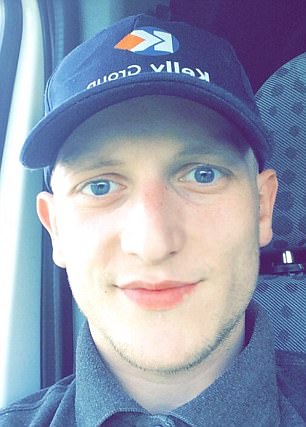 Bolland, 23, was today charged with three counts of murder and four counts of attempted murder as well as arson with intent to endanger life. His girlfriend Courtney Brierley, 20, has been charged with the same offences 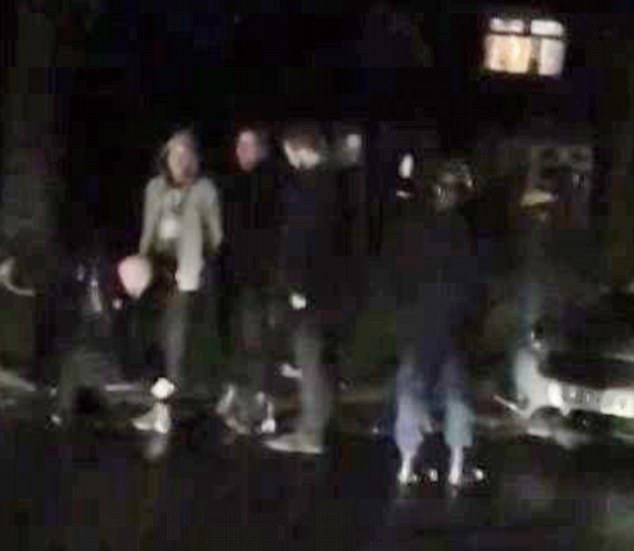 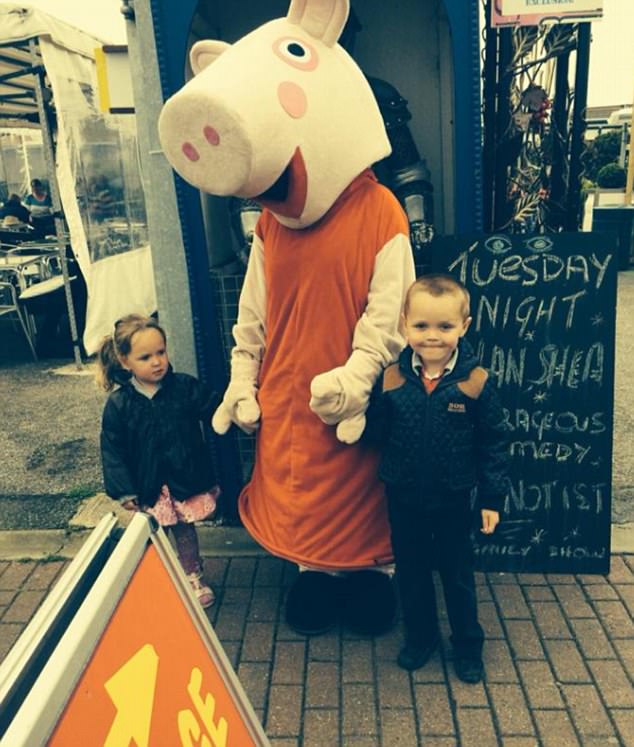 Brandon, eight, and Lacie, seven, pictured with Peppa Pig, also died following the tragedy in the early hours of Monday 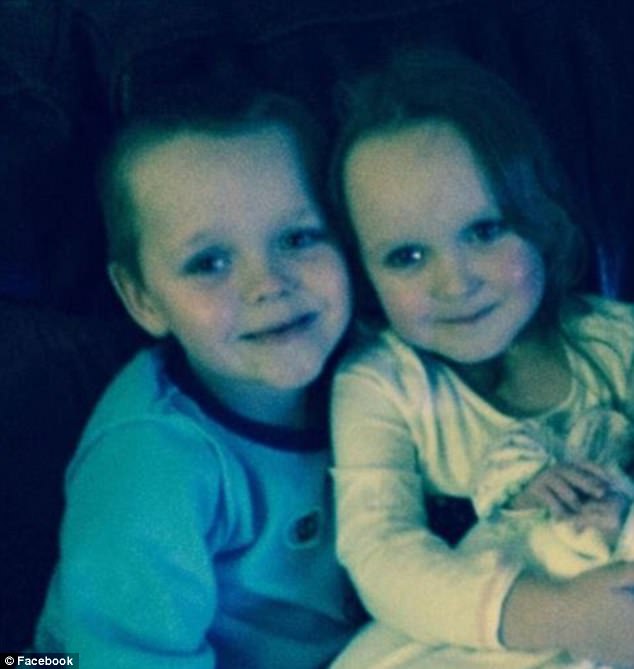 Demi Pearson, 14, was the eldest child to be killed in the deliberate fire in Manchester yesterday as it emerged police had already been to their house hours earlier. Her mother Michelle, 35, survived but is fighting for her life

Timeline: How the fire horror unfolded

Police called to the house after an incident and leave again.

Fire service called to Jackson Street in Walkden, Salford, after reports of a large fire in terraced house.

Street closed off as it emerges six people – five from the same family – are taken to hospital.

First victim of the fire was named as 14-year-old Demi Pearson.

A neighbour of Courtney's mum Jackie, in Worsley, Manchester said 'They have a real reputation in the area. Everyone will know who Courtney is.

'I know the family live here but I wouldn't be surprised if they get moved off the estate after all of this.

'She hung around more on another estate so we didn't see her that much but we knew her when she was here.

'It's awful what has happened and I don't know what led to it.

'I really wouldn't be surprised if they get moved.'

It has also emerged that Michelle Pearson has suffered a number of tragedies in recent years and was forced to bring up her five children alone after her long term partner Paul died of cancer a year ago.

Family friend Kyle Skelhorn, 31, said: 'It's devastating. The mum tries her hardest to make ends meet. It's a crying shame a poor family can experience this'.

Floral tributes, toys and candles have swamped the pavement outside the house.

Investigators, wearing white plastic suits, took pictures of the roof and chimney of the burned-out property.

The heavy-duty blockade is lined with police vehicles and officers making enquiries as they patrol the scene.

The large steel blanket blocks off public access to the street as people from the surrounding community pay tributes.

A smiley emoji soft-toy placed underneath the Jackson Street road sign has the words 'RIP Demi, Brandon and Lacie' penned across it.

A fundraising site has also been launched to support the family with £1,000 raised from a £2,000 target.

The fire may have been started after fuel was poured into the house from the roof and set alight after clambering up some scaffolding. 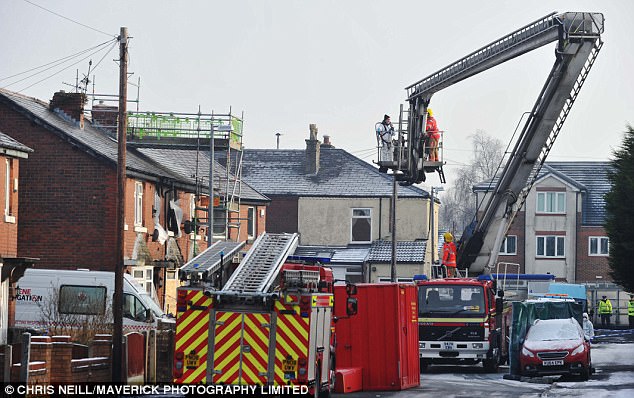 Pictures from the scene today show the fire-damaged window frames of the house. There are claims the fire may have been started via the chimney after climbing up the scaffolding (pictured left) and forensics teams are using a high ladder to inspect its roof 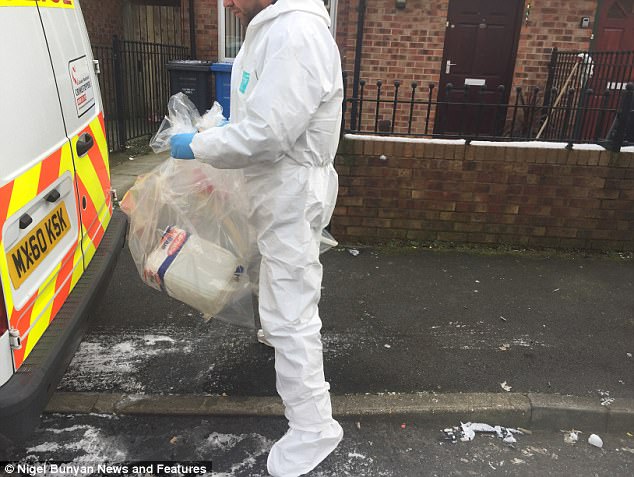 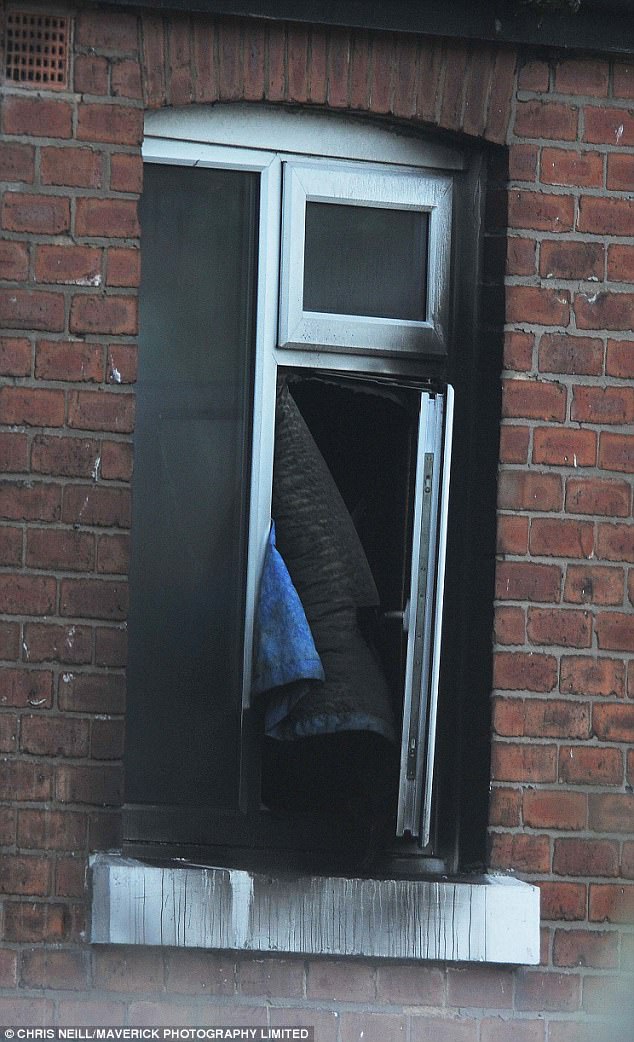 One father-of-two on the street said: 'They're an alright family. There were four boys that were all brothers and their mum, from what I could tell.

'I work nights and didn't see or hear anything until I came home from work yesterday morning and the police were sat outside.

'The lads were alright to talk to when they walked past. There was Zac who I'd say was around 23, an older one I think then there were two others who were teenagers or about 20.

'I'd see them on the street and say hello but that's it. I never saw them involved in any trouble on this street.

Another neighbour, who didn't wish to be named said: 'I'm friends with their mum and only saw her on Sunday afternoon.

'She never mentioned any trouble. She moaned about typical stuff that young lads get up to but never anything like that. Their mum is a good woman.'