By Mary Kekatos For Dailymail.com

And as they hoisted the Vince Lombardi trophy, there were plenty of wives and girlfriends in the stands cheering them on.

Below are just some of the WAGs – an acronym for the wives and girlfriends of athletes – got to celebrate with their better halves. 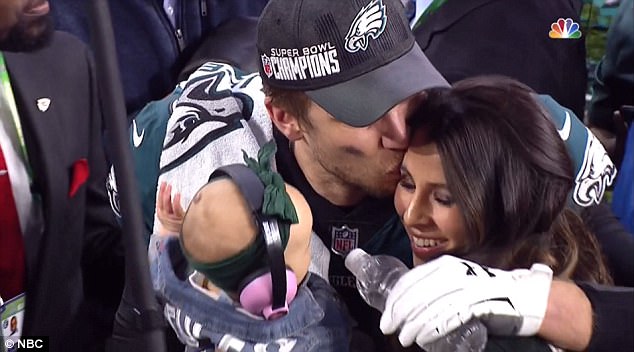 Super Bowl MVP quarterback Nick Foles and his wife Tori Moore met at the the University of Arizona. Foles was the quarterback of the football team, while Moore was a setter on the volleyball team

The Super Bowl MVP quarterback and his wife met at the the University of Arizona. Foles was the quarterback of the football team, while Moore was a setter on the volleyball team.

'She was the first person I actually ever saw at the University of Arizona,' Foles told the Press of Atlantic City in 2014.

'I was going to my [football] physical. I remember walking down the stairs and thinking: 'Wow, this might be the most gorgeous person I've ever seen'.'

The two became friends in college but didn't begin dating until they finished. They were married in April 2014, have a baby daughter named Lily.

Arund that time, Moore quit her job at Nike, Inc when she was diagnosed with Postural Orthostatic Tachycardia Syndrome (POTS), which led to an underlying diagnosis of Lyme Disease.

But despite the life-changing news, she remained hopeful when she wrote about the experience in a blog post for The Increase Women.

'For me, this illness has been a journey of faith, hope, and trust in the process that God has set out for me,' she explained. 'Through my writing, I hope to be able to give some perspective on how to view difficult situations and help inspire people to find purpose in what they are going through.' 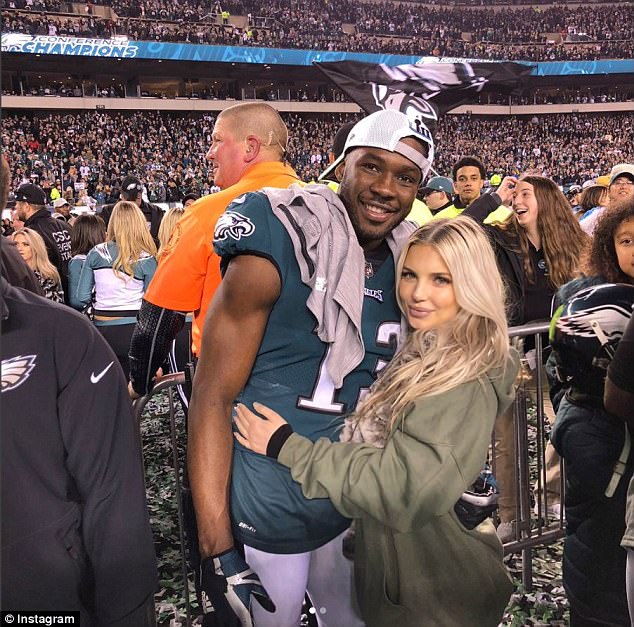 Agholor, 24, one of the star wide receivers in the NFL has been dating Volpicelli, 22, a beauty and skincare blogger.

Volpicelli has a degree in real estate development from the University of Southern California, which is where the pair met.

Agholor played for the USC Trojans football team from 2012 to 2014, before leaving to enter the NFL Draft after his junior season.

After the Eagles won the NFC Championship, Nelson wrote to his girlfriend on social media: 'Grateful for my teammates and the city.. special shoutout to my soulmate and wonderful girlfriend thank you for your support and sacrifice.' 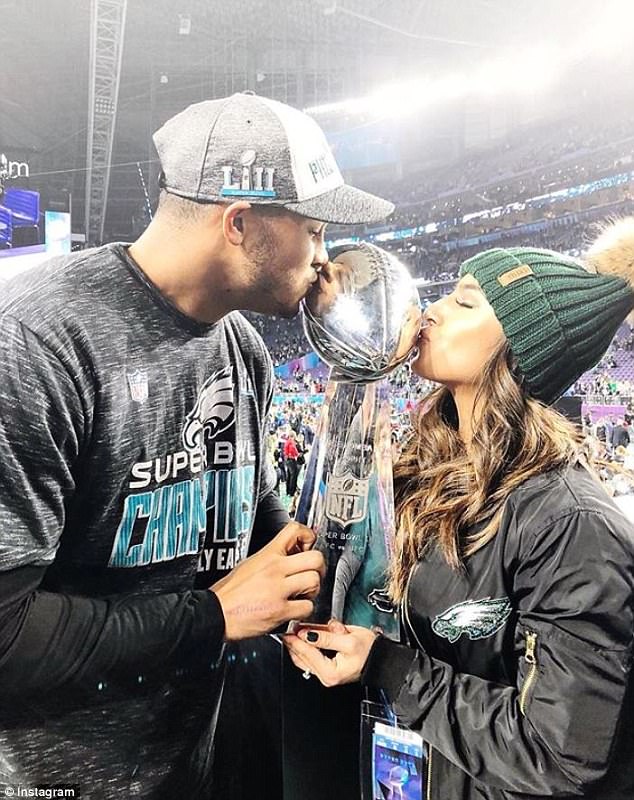 Ivana Hicks met her husband while at the University of Texas, and became engaged after linebacker Jordan proposed of a lavish sail boat

Linebacker Jordan, 25, tied the knot with Ivana last summer in a huge ceremony attended by several members of the Eagles.

Ivana met her husband while at the University of Texas, and became engaged after Jordan proposed of a lavish sail boat

She told Southern Weddings: 'We met through a mutual friend [during] Jordan's sophomore year, my junior year, in college. My friend Lydia and I were talking at a picnic table in the heart of campus as Jordan was walking by.

'Lydia calls him over to say hi and he briefly introduced himself to me. A day later, he reached out to Lydia asking about me, and and before I knew it, I was seeing him more and more around our 40-acre campus.

'We eventually exchanged numbers which led to us going on our first date. Since then, we have been inseparable!' 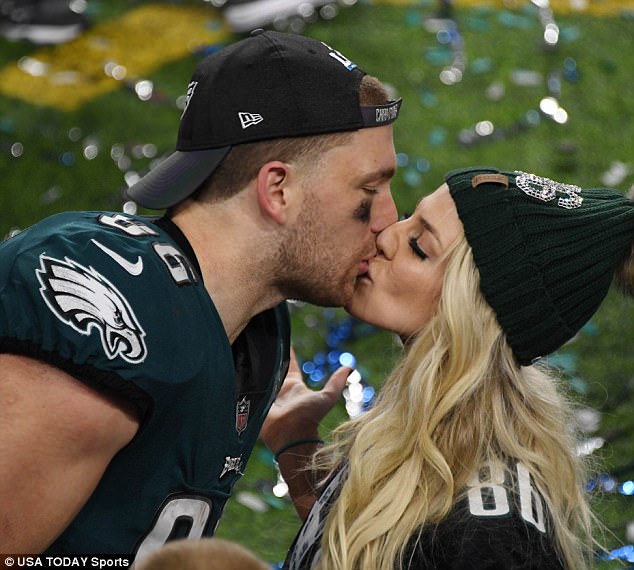 Zach Ertz and his wife Julie are both accomplished athletes. Zach is a tight end while Julie is a midfielder for the US women's soccer team

Zach, 27, and his wife Julie, 25, are both accomplished athletes. Zach is a tight end while Julie is a midfielder for the US women's soccer team.

She was named 2017's US Soccer Female Player of the year.

The sweethearts met in college – he went to Stanford and she went to Santa Clara -while attending a Stanford Cardinal baseball game.

Last month, Julie was playing with the US women's team when the Eagles earned a trip to the Super Bowl – and the moment she learned that her husband was heading to Minneapolis quickly went viral. 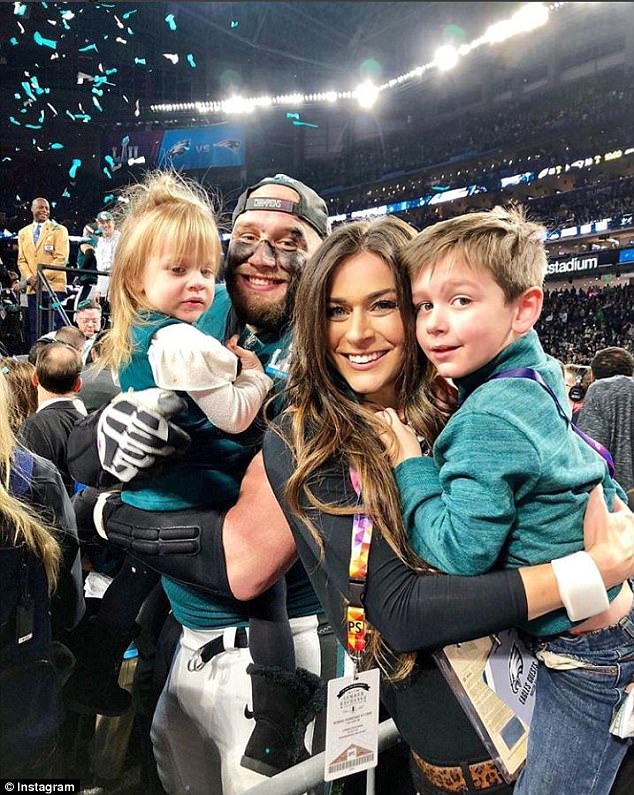 Yet another Eagles player with a sporty wife, offensive tackle Lane, 27, met Chelsea at the University of Oklahoma.

Chelsea, 26, as a high jumper and hurdler on the Oklahoma Sooners' track and field team, and her father, John Goodman, played for the Pittsburgh Steelers.

The couple have two children, a son and a daughter. 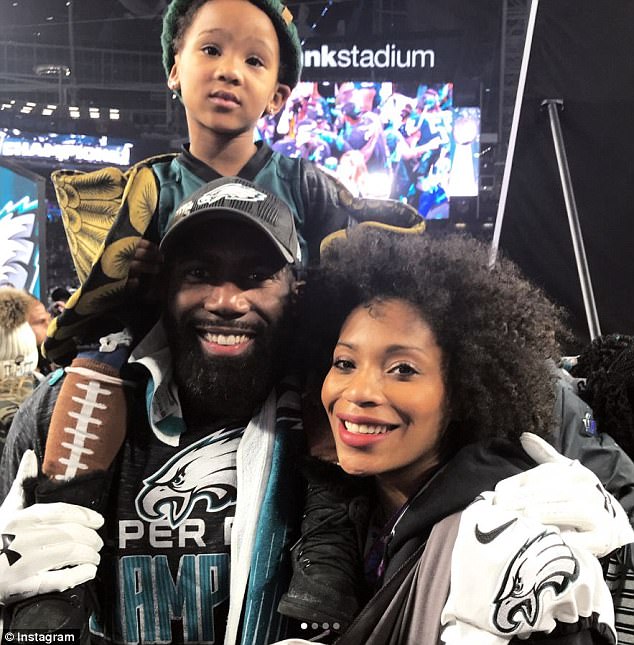 Morissa Jenkins runs her own beauty company, Meaux Moisture and is heavily involved in her her husband's charity, the Malcolm Jenkins Foundation.,

Safety Malcolm, 30, and his wife Morissa first met in 2008 through mutual friends in their sorority and fraternity at Ohio State University. The couple tied the knot in July 2011 and have two daughters.

Morissa, 33, runs her own beauty company, Meaux Moisture, and is heavily involved in her her husband's charity, the Malcolm Jenkins Foundation.

The Foundation has spearheaded the Cease Fire Campaign in New Orleans to reduce gun violence, as well as funded scholarships for first-generation college students and rebuild homes that were destroyed by Hurricane Katrina.

She told PhillyVoice that she still gets nervous every time her husband take the field.

'I've become a pro at it by now but there is no way I would let Malcolm know how nervous I get,' Morissa said.

'We have a routine when they come out – he runs to the far end zone, kneels and prays. I usually say a prayer for him, too. 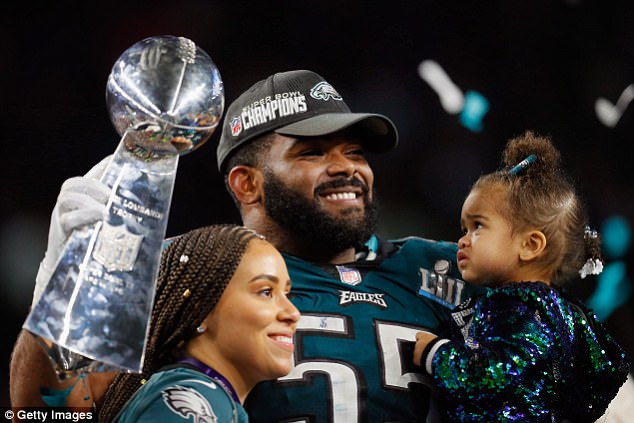 Defensive end Brandon and Carlyne first met while attending Crockett Technical High School in 2002 in Detroit but began dating in college The couple married in May 2014.

Brandon, 29, went to the University of Michigan while Carlyne attended Lane College, a historically black college in Tennessee while also enlisting in the army reserve for three years.

She continued her studies at Loyola University and graduated in 2012 obtaining once again dual degrees in social work and child and family law.

They have a two-year-old daughter and Carlyne told CBS Philly that her husband is very involved despite his busy schedule.

'He's very involved, even on his busy days. Even after the games, he makes sure he gives her her bath. They have their bath time,' she said. 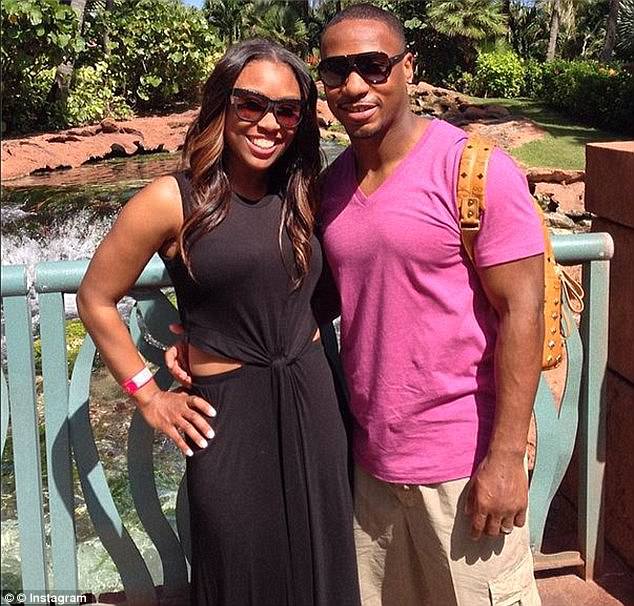 Running back Darren and his wife Michel met in 2006, while he was a member of the San Diego Chargers. They spoke on the phone for two months before they met – and married in 2010

Running back Darren, 34, and his wife Michel met in 2006, while he was a member of the San Diego Chargers. They spoke on the phone for two months before they met – and married in 2010

She was diagnosed with breast cancer in 2012 and had a double mastectomy followed by reconstructive surgery, according to Capitol Standard.

A few years ago she launched a wig line called The Pink Line. The line creates premium wigs and hair units for cancer patients and breast cancer survivors.

The couple have two daughters, ages seven and four, and she called her husband a doting father.

'Darren has an amazing relationship with our daughters. He's so normal,' she told the magazine.

'He comes home and gets into daddy and husband mode. We don't talk about football. On Sundays we might recap the game but that's all. He makes sure my gas tank is full. He takes out the trash. He's a normal, awesome dad. 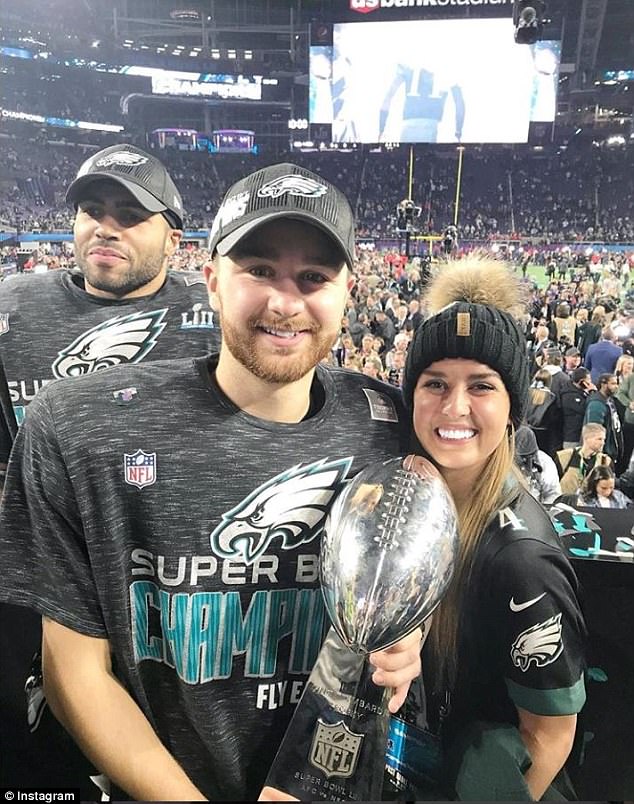 It is unclear when Jake Elliott and Annie Timyan first began dating. The first time they show up on each other's Instagram was during July 4 weekend in 2017

Timyan, the girlfriend of kicker Elliott, is a recent graduate from Auburn, receiving both her bachelor's and her master's there.

Her last professional update indicated that she was still there, working as a Graduate Assistant at the school.

It is unclear when the couple first began dating. The first time they show up on each other's Instagram was during July 4 weekend in 2017.

However, the first indication that they are significant others is when they appeared in a photo together with Timyan wearing Eagles garb in September.

Timyan turned 23 when the Eagles beat the Minnesota Vikings in the NFC Championship game and because 23-year-old Elliot couldn't celebrate with her the right way, he took to Twitter and Instagram to make amends

'Happy 23rd to this gal! Can't wait to throw you the biggest party ever in Minnesota next Sunday! #JordanYear' he captioned a photo of her.